Students and staff from universities across the UK have put out a call to action to ‘decolonise the curriculum’. This movement calls for a greater representation of non-Eurocentric views and a better historical awareness of the contexts in which scholarly knowledge is produced. It is hoped that a ‘decolonised’ university will not only encourage a more authentic education for all students, but will also address some of the inequalities within higher education relating to access, representation, continuation, and attainment, that currently exist along lines of race and ethnicity.

A number of UK universities have committed to a sustained effort to decolonise university courses. This is especially true of SOAS, which has become an active hub for research, collaboration and information on the decolonisation of higher education institutions. One of the more recent areas of exploration is how decolonised curricula may play a role in making access to university fairer.

It is the mission of university widening participation teams and university access charities, such as The Brilliant Club, to increase the number of people from underrepresented backgrounds studying and thriving at university. For many school pupils and prospective mature students, university access programmes provide their first taster of what studying at university could be like. It is vital that these programmes are able to authentically promote the idea that universities not only welcome students from diverse backgrounds, but that their cultural perspectives and histories will be a valued asset.

With this is mind, SOAS have collaborated with The Brilliant Club to conduct a pilot study investigating how pupils from underrepresented backgrounds engage with decolonised learning. This was explored within the context of a widening access programme called The Scholars Programme, run by The Brilliant Club in partnership with universities and schools across the whole of the UK.

The Scholars Programme involves training and placing PhD researchers to deliver a series of tutorials on the topic of their research, to small groups of pupils from state schools. The aim of the programme is to provide pupils with a taster of university-style learning and support them in developing the knowledge and skills they will need to progress and succeed at university.  By the end of The Scholars Programme, pupils will have completed a university-style assignment, received guidance about applying and studying at university, and have the opportunity to attend two trips to different university campuses.

As The Scholars Programme is designed to support pupils to engage critically with new and complex topics, it provides an ideal platform for exploring how pupils interact with decolonised content. For the purpose of this pilot study, Dr Kerem Nişancıoğlu, from the Department of Politics and International Studies at SOAS, adapted a course previously designed for The Scholars Programme, titled ‘Inside No.10: The British Prime Minister in the Postwar Years’. The course is aimed at 11-14 years olds and focuses on the influence that British post-war prime ministers had in shaping social, economic and foreign policy.

In order to draw like-for-like comparisons between the two versions of the course, the overall structure was kept the same, aside from one key theme. Where the original course placed emphasis on the role of emerging technologies in shaping government, the decolonised course placed emphasis on migration and the transforming definitions of British citizenship. You can see excerpts of the different course rationales below: 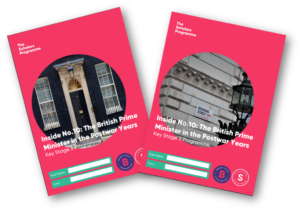 “The course will look at what the Prime Minister actually does, who helps them, and how the role of prime minister has changed in the years since the Second World War. The course begins with an introduction to the British political system, and an overview of postwar British history. Case studies of two influential prime ministers then follow, which will focus on key aspects of social policy, foreign policy, political style, and influence of the media. These case studies will allow pupils to explore the evolution of the welfare state, Britain’s changing role on the international stage, and the ways in which technology has impacted government.”

“The course will look at what the Prime Minister actually does, who helps them, and how the role of prime minister has changed in the years since the Second World War. The course begins with an introduction to the British political system, and an overview of postwar British history. Case studies of two influential prime ministers then follow, which will focus on key aspects of social policy, foreign policy, political style, and influence of the media. These case studies will allow pupils to explore the evolution of the welfare state, Britain’s changing role on the international stage, migration and how definitions of British citizenship have been transformed.”

Four PhD tutors, with research backgrounds in history, sociology and political philosophy, were recruited and trained to deliver both versions of the course. Each tutor visited a non-selective state school to teach one group of six pupils the original course and a different group of six pupils the “decolonised” course. While the scale of the pilot study was small (48 pupils receiving the original course and 48 receiving the decolonised course), differences in pupil outcomes were observed. Compared to pupils who received the original course, pupils on the “decolonised” course received higher scores and demonstrated greater improvements in academic writing, subject knowledge, and critical thinking skills (as measured from written assignments produced at the start and the end of the programme).

The findings of this pilot study are promising but should be considered anecdotal given the relatively small sample size and lack of randomisation. We encourage researchers and widening participation teams to join us in expanding the evidence base for decolonised pre-entry university access programmes and how they could be used to promote a more inclusive, diverse and constructive academic community.

With this is mind, here are four lessons and recommendations we have taken from this pilot study:

This pilot study was designed intentionally to focus in on a single decolonised element of a wider course. We now encourage a more holistic approach to decolonising the curriculum; that encompasses pedagogy, teaching delivery, activity design and assessment.

The rationale of the decolonised course remained focused on British Prime Ministers and what makes them successful. This predisposed pupils to a particular form of study, centred on the agency and decision making of great people. Future decolonised widening participation interventions should challenge pupils to consider what makes someone a legitimate subject of study and why.

Feedback from the PhD tutors indicated that they valued being involved in the study and would have liked to facilitate more direct and in-depth discussions with pupils about how the dominance of Eurocentric perspectives shapes interpretations of people and events. Therefore, we recommend building protected time for open discursive conversations about decolonisation.

This pilot study primarily focused on pupil learning outcomes. However, another core aim of decolonising university access programmes is to foster students’ belief that they will belong at university and have an enriching and inclusive learning experience. Therefore, future research should focus on understanding pupil experience.

If you would like to know more about this pilot study or The Brilliant club in general, please email: hello@thebrilliantclub.org

If you would like to know more about the work of the Access, Participation & Student Success team at SOAS, please email Julien Boast: jb73@soas.ac.uk