Connor Long-Johnson began his journey as a Scholars Programme tutor with The Brilliant Club in January 2022 and has brought his passion for literature into London classrooms. Connor is currently studying for his PhD in Gothic literature at the University of Greenwich and teaches Gothic Literature: An Introduction to Year 9 and 10 students at George Green’s School in Tower Hamlets and The Oasis Academy Arena in Croydon.

The Brilliant Club caught up with Connor recently to talk to him about how the course is going so far and why he’s passionate about academia becoming more accessible.

Connor’s English literature-based course introduces students to brand-new texts, ones which go beyond the core GCSE syllabus. So far, his students have explored excerpts from Dracula, Frankenstein and Dr Jekyll and Mr Hyde.

There is value in looking at different texts, according to Connor, particularly those students may not encounter in school. And it’s not just reading and comprehension which Connor wants his students to take away from his classes, he wants to equip them with life skills which can be translated into a plethora of academic and professional ventures.

“Reading is about so much more than just being able to sit down and concentrate for an hour. It’s about questioning what’s put in front of you. It’s about communicating your ideas, about what you’ve found and what you believe. These are skills which you need throughout the entirety of your life. They’re not things that you might use during your GCSE years and then completely abandon.”

Being a Brilliant Club tutor has helped Connor master some skills too, so both the tutors and students are learning during tutorials. 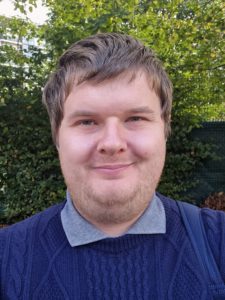 “Even now as a tutor I’m honing my life skills. This opportunity to work with The Brilliant Club has allowed me to hone my presentation skills, my public speaking skills, and my public engagement skills.”

Connor acknowledges that his journey into academia was not completely straightforward. He spent most of his life unaware of his neurodivergence, only discovering that he was on the autism spectrum in his final year in his undergraduate degree.

As he looks back at his time in education, he said he suffered discouragement from teachers at an early age. One teacher had even labelled Connor as ‘weird’ in primary school, knocking his self-confidence. Because of these experiences, Connor is particularly invested in promoting educational equality for everyone.

“There’s always been questions about how far I could go. I do think that’s because of my class and where I’m from. To defeat that and rise above it is wonderful,” he reflected.

Growing up in Peckham in Southeast London, he witnessed how educational inequality prevented students from reaching their full potential.

He’s particularly aware of the prejudice experienced by less advantaged students. Even today, Connor notices that people react in a certain way when he tells them where he’s from.

As a Brilliant Club tutor, Connor hopes he can inspire the next generation to pursue their dreams and show them that there is a place in academia if they want it.

“My personal objective is to really hammer home to these students that they can do it. No matter how low their confidence is right now, they can ‘hack’ university. It’s something that is accessible to them.”

“If we don’t bridge the gap in education, we’re leaving a treasure trove of knowledge and passion behind. Living in the urban sprawl of South London right now could be the person that cures cancer. There could be the person who could write a best-selling novel. If we do not fight inequality and help that person to university, they are going to be falling under the radar.”

Connor feels passionately that educational inequality goes beyond the individual. When individuals miss out on opportunities, so does wider society.

“By bringing one person forwards, we are raising the standards for everybody. It’s essential we understand that,” he said.

The Brilliant Club’s mission is something which Connor describes as “infectious” as his role as a tutor has brought him together with a community of young academics who want to change academia for the better.

“We have a group chat where we can throw ideas at each other and it’s things like that which make me feel part of a larger whole. It makes me feel like I’m having an impact, not just with the children but with the charity itself. I really enjoy that, it gives me a great sense of accomplishment and that comes from how good and how strong the community is.”

The community is something Connor has been a part of for a while, starting when he was a student of The Scholars Programme during his A-levels. It was his experience as a student which helped him change the way he viewed his own capabilities, and the prospect of university.

“It was all about the confidence the programme gave me. I did the tutorials, found them manageable, did the assessment, got the university grade and that gave me so much confidence going forward. I was thinking ‘okay maybe this whole university thing isn’t as difficult as I’d first thought so actually let me jump in and have a go’”.

Connor is on the final stretch of completing his PhD thesis at the University of Greenwich, where he has been for the past seven years immersing himself in English.

Gothic literature is Connor’s speciality, specialising in Gothic London for his MA and now completing his PhD researching Stephen King and his links to the Gothic tradition.

He has really enjoyed bringing his love for Gothic literature into London’s classrooms.

“I think one of the most wonderful things about the Gothic is that it makes us confront things in our own lives that make us uncomfortable. I think that’s a good starting point for pupils as it gives them that little bit of self-reflection that they need. It asks them to confront things that might make them uncomfortable. That’s something which, again, they can take forward.”

Connor is anticipating that he will hand in his thesis in autumn this year. His experience as a Brilliant Club tutor, as well as tutoring undergraduates at the University of Greenwich, has solidified his love for teaching, something he hopes he can continue to do after he finishes his studies.

You can find about more about becoming a tutor with The Brilliant Club here.